First a brokerage firm took investors money in an outright theft.
Now as the ‘crisis’ within the EU has gotten serious, we have ‘bankers’
who feel the whole banking industry is ‘above the law’…
NOTE that suddenly, this theft of deposits by failed bank systems, has been
stated to be ‘exclusive to this instance, only within the EU, and will NOT be used
in any other cases’.
And yet the banking system in Greece is now getting the ‘good parts’ of a
Cyprus bank.
It must be understood that you have an International Transaction by the
Central Banking System. A transfer of ownership from one Central Bank’s
System to another one, one country to another.
How long before other Central Banks thinks this is a good idea?
Is your money safe?
~ Drake 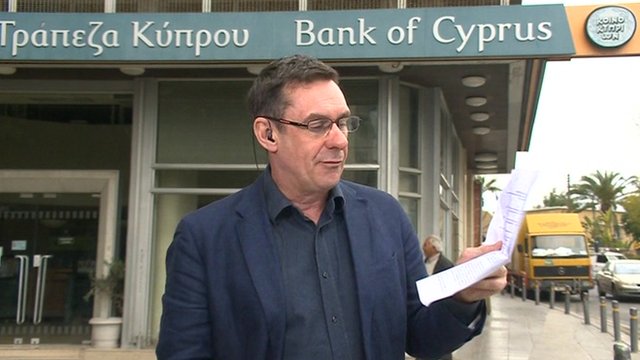 The BBC’s Paul Mason: “Every figure in this document has the word ‘euro’ and two x’s”

The head of the Cypriot central bank has said that “superhuman” efforts are being made to open the country’s banks on Thursday.

Banks in the country have been shut for more than a week as a controversial bailout was negotiated, which will see depositors take losses.

“We have to restore the public’s trust in banks,” Panicos Demetriades said.

Meanwhile, the BBC has learned that Cyprus is planning to impose a weekly limit on cash withdrawals.

In addition, fixed-term deposits will have to be held until maturity.

“A superhuman effort is being made for the banks to open on Thursday,” Mr Demetriades said. He also confirmed that “temporary” capital controls will be imposed on the island, but he would not spell out the restrictions and how long they would last.

Banks have not been open since 15 March. Their reopening had been expected after Cyprus agreed a deal with the International Monetary Fund (IMF) and the European Union (EU) that releases 10bn euros in support.

The Cypriot authorities had previously said all that but the biggest two banks would open on Tuesday, but they have remained shut while the finer details of capital controls are handled by the Cypriot central bank.

‘Not decided’Earlier, Cyprus’s finance minister earlier confirmed that depositors with more than 100,000 euros could see 40% of their funds converted into bank shares.

But Michalis Sarris also said that Cypriot depositors with less than 100,000 euros in their accounts “will not be hit”.

“The exact percentage is not… yet decided but it is going to be significant,” he told the BBC.

Bank of Cyprus chairman Andreas Artemis handed in his resignation but local reports suggested that the troubled bank’s board had rejected his resignation.

Later, Mr Sarris told reporters: “The exit of Cyprus from the eurozone, which could mean the exit from the EU, would be disastrous, politically and economically. We do not even want to contemplate it.”

Capital controlsThe final size of the loss faced by investors will depend on how the government decides to protect pensions, Mr Sarris said.

He confirmed that all Cypriot banks will remain closed until Thursday and that capital controls will be placed on the size and the amount of money people will be allowed to withdraw once the banks have reopened.

These restrictions would “probably be a bit stricter” on the country’s two largest banks, Bank of Cyprus and Laiki, and would remain in place until the banking system “stabilises”, he said.

The exact details of this “two-tier system” would be hammered out with the banks later on Tuesday, he said.

Mr Sarris is expecting “some bleeding, some outflow” of funds once the banks reopen, but believes that once EU bailout funds begin flowing “in a matter of weeks”, confidence will return.

Although the economy would be badly hit by the economic crisis, Mr Sarris admitted, he maintained that it could benefit from “an energy boom”, referring to the exploratory Aphrodite gas fields off the southern coast of the island.

“Yes, there will be a problem but we will overcome it in a relatively short period of time”, he said. He also said his government had renegotiated more favourable loans terms with Russia.

It was conditional on Cyprus itself raising 5.8bn euros, most of which looks likely to come from depositors with more than 100,000 euros (£85,000) in Bank of Cyprus and Laiki or Popular Bank.

‘Unique case’Members of the European Central Bank (ECB) have been emphasising their view that Cyprus is an isolated case within the eurozone, and that the proposed rescue plan would not be applicable to other eurozone countries.

Speaking to reporters at a conference in Prague, Ewald Nowotny, member of the ECB’s governing council, said: “Cyprus is a special case. It is no model for other instances” – a view earlier expressed by Benoit Coeure, ECB executive board member.

On Monday, Jeroen Dijsselbloem, head of the eurozone’s finance ministers, had spooked the markets when he suggested Cyprus’s bailout could serve as template for crises elsewhere – comments he later retracted.

Many analysts had been concerned that the Cyprus crisis would spread to the wider eurozone had the country been forced to give up the single currency.

There were fears that the country’s possible exit from the euro would trigger a loss of confidence across the single currency bloc, and prompt investors to withdraw from other troubled economies, such as Greece.

Do you have funds in Cyprus banks? How is the banks’ closure affecting you? What is your reaction to the bailout? Send us your comments and experiences using the form below.

More on This Story